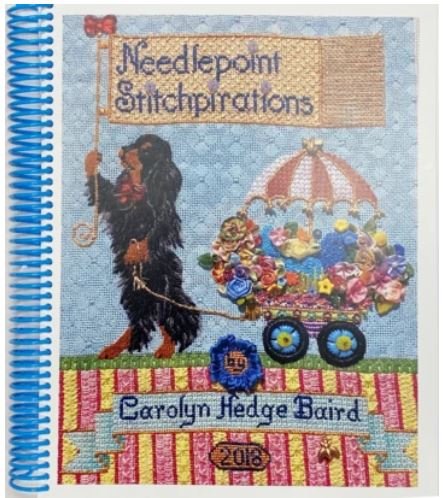 By Carolyn Hedge Baird. Needlepoint Stitchpirations is Carolyn's sixth needlepoint stitches book. She was inspired to begin the book when her son, then a lieutenant in the United States Army, was deployed to Afghanistan. Assembling the book helped her focus on the joys of needlepoint rather than the worries of being a military mom. Over the years, she has collected stitches from many inspiring sources, such as seeing stitches on canvases at market, finding new ones while working on canvases for needlepoint classes, even discovering stitch patterns on tile floors in a hotel. This book is composed of 10 chapters, with extensive explanations outlining shapes, figures, and other areas, as well as beading. Chapter topics include blackwork, combination, crosses, diagonal, eyelets, inside-out mosaic variations, laid fillings, open, and Painted Pony angel wing stitches.